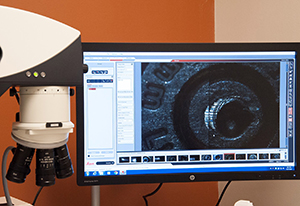 Evidence collected from crime scenes is examined and microscopically compared with test samples collected from test fired firearms in the laboratory in order to determine whether a particular firearm was used in an incident/or determining how many different firearms were used.

Firearms Examiners use a comparison microscope to analyze unique striations, or markings, left behind on fired bullets and fired cartridge cases.

The laboratory utilizes an indoor firing range which contains a water tank, cotton box and a remote firing stand used for test firing damaged or unsafe weapons. Known standards are collected from submitted firearms and can be later compared to fired bullets and fired cartridge cases collected at crime scenes.

Occasionally firearms are submitted with obliterated serial numbers. The Firearms unit performs serial number restorations using a series of acids possibly discovering that the firearm was stolen or even tracing the firearm back to its owner. 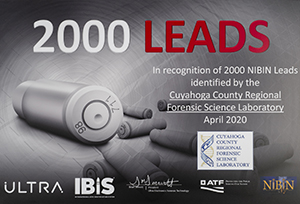 Additionally, the firearms unit is partnered with the Bureau of Alcohol, Tobacco, and Firearms (ATF) in the usage of the National Integrated Ballistic Information Network (NIBIN).

Specialized equipment known as the Integrated Ballistics Identification System (IBIS) is used to digitally capture images of fired cartridge cases which are then uploaded into NIBIN database which performs a computer-based comparison of the image against previously entered cartridge cases in the database. The primary goal of the program is to link fired crime scene cartridge cases back to a firearm and to link previously unassociated cases.

The following methods are used for firearm analysis in forensic cases by the Firearm and Tool Mark Unit: