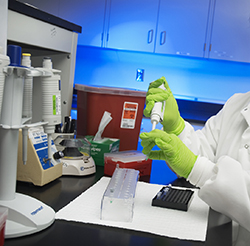 The latest population genetics statistical models are used to calculate relationships between individuals.

Who needs to be tested?

The mother, the child, and the assumed father all need to be tested. We can also complete the test accurately without the mother sample. However, this test involves more analysis and may take a few days longer to be completed due to the need of additional testing.

Can a paternity test be performed if the alleged father is missing or deceased?

Several testing options are available in situations where the alleged father is missing or deceased:

The first option that should be considered is DNA testing on a sample taken from the deceased, such as stored blood or a tissue sample. (This type of sample usually comes from a Coroner's Office, Medical Examiner’s Office or a hospital.)

If usable DNA is found in the sample, we can conduct a paternity test using it as the alleged father's sample. For this type of testing you will need to obtain Court Order to be sent to Coroner’s Office, Medical Examiner’s Office or Hospital to release the sample to the laboratory.

When do you need parentage or relationship test?

Child Support:
DNA paternity test results can be used in legal matters involving child support. Courts universally accept DNA testing results when determining whether or not an alleged father should be responsible for child support, depending, of course, on the outcome of the test.

Child Custody/Visitation Rights:
In some cases DNA testing may be required in custody/visitation issues. Whether or not a tested man is determined to be the father of a child, using DNA testing, can be a deciding factor in the courts if he will have legal access to a child.

Immigration:
Often the U.S. State Department requires DNA testing of family members of U.S. citizens who wish to emigrate from other countries into the United States. Family relationships must be proven through DNA testing in order for the family in the U.S. to sponsor those wishing to immigrate. Without this definitive proof, immigration and U.S. citizenship can be denied.

Insurance/Inheritance Claims:
Insurance companies often require proof of paternity in order for them to add a child on an alleged father's insurance policy. This most often happens when the mother and father are not married, or if the alleged father's name was not put on the birth certificate at the time of birth. In these cases DNA testing is the only proof of paternity, insurance companies will accept.

Often in inheritance issues, courts will take into account family relationships in determining how an estate will be divided. Our DNA testing can determine many types of relations including half and full siblings, grandparents and grandchildren, aunts and uncles, etc.

Welfare and Social Security Cases:
If the Acknowledgment of Paternity (AOP) form is not signed when the child is born paternity test is required to legally establish who the father is. Naming a legal father is vital in ensuring that the child is eligible for child support and benefits such as social security, veteran’s benefits and health care.

Understanding DNA Parentage Test:
A paternity test works by comparing a child’s DNA profile with that of an alleged father (and often the mother as well). Because a child inherits half of his or her DNA from each biological parent, such a comparison reveals whether the child could have inherited DNA from the alleged father. When individuals are biologically related as parent and child, their DNA profiles show predictable patterns of genetic inheritance.

Paternity testing compares the numbers for each of these markers between the father-in-question, mother, and child. Half of the child’s numbers at the DNA markers should match the mother’s and the other half should match the biological father’s. Although the mother doesn’t need to submit a sample, the laboratory will need to take extra steps during a paternity test without her.

Understanding Results:
In addition to the lab test results, which show the DNA marker values of the child, mother, and father-in-question, there will be two other numbers in the report:

What happens at the appointment?

When you arrive at your appointment, you will need to present proper identification, which the sample collector will verify and photocopy.

You will also have your photograph taken.

These three elements are required by the chain of custody procedure, which makes your test results legally admissible in the Court of Law.After you are properly identified, you will need to sign a form giving your consent for the test. If you are the legal custodian of a minor being tested, you will have to sign the form on behalf of the child.

The collector will collect your DNA samples using simple cotton swabs that he or she will rub against the inside of your cheek to gather loose cheek cells. The collector will then send all the samples to our laboratory.

All adult test participants must bring a valid government-issued ID such as a driver’s license, state ID, military ID, or passport. For minors, a birth certificate, Social Security card, or hospital birth record is sufficient.

Whole collection procedure and paperwork will take about half an hour.

During this time, you can ask any questions or raise your concerns. Our staff will make sure that you will have all the answers.

All adult test participants must bring a valid government-issued ID such as a driver’s license, state ID, military ID, or passport. For minors, a birth certificate, Social Security card, or hospital birth record is sufficient. Whole collection procedure and paperwork will take about half an hour. During this time, you can ask any questions or raise your concerns. Our staff will make sure that you will have all the answers.

Our Office is located on the first floor of the Cuyahoga County Medical Examiner’s Office facility. Parking is available and we are easily accessible by public transportation.